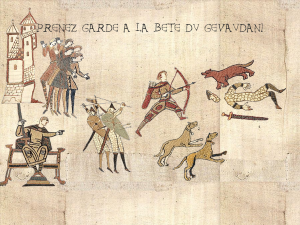 The assignment of using “Historic Tale Constrvction Cit” to make a tapestry story seems go to very well with our theme, so it’s rounding out my starred assignments this week. However, the link provided in the assignment doesn’t work, so I googled it and used this: https://htck.github.io/bayeux/#!/

For the story and design of this tapestry, I decided to go very French, as the Bayeux Tapestry is French. So, I first googled a French cryptid. The one that popped up after research was the Beast of Gévaudan. After looking at the Wikipedia page for it, I found that it was supposed to have a red-colored coat, so I went with the closest equivalent on the website. Then, it said that the animal attacked the heads and necks mainly, so I added the dead guy with the severed head. The townspeople were scared and being attacked, so I added them in the corner. Finally, I added the kingly person, as there was royal help, directing help towards killing the beast.

Yes, there are some inaccuracies compared to the Bayeux Tapestry and also what supposedly happened. First, the beast “lived” in the mid 18th-century, not the middle ages. Also, the language on the real tapestry is Latin, not French. However, I only know French, not Latin, so I went with French, although this still might not be grammatically correct! Also, there are missing accent marks, as I could not copy-paste the wording and I couldn’t figure out how to do the accents otherwise. The text should be: Prenez Garde à La Bête du Gévaudan. In addition, this is modern French. While Modern French was spoken in the 18th century, it probably wasn’t exactly like today’s French. Another thing: the beast was shot with a bullet, not an arrow. However, this is a middle ages interpretation! Finally, the person who “shot” the beast didn’t do so under the direction of royalty, but under local nobility, although the person with the sword could represent both.

This website and the assignment was fun! I actually do remember the memes from the original flash version, which was taken down (why the link no longer works). The application is straightforward to use and really it’s all up to your imagination and skill! I have no idea how tapestries are actually laid out, so I just winged it! While my tapestry is not particularly accurate (though no one besides me cares) it does tell the story! It is also not quite safe-for-school, so hopefully that won’t be an issue! It was interesting to take this old story, put it in an even older format, and then create is using modern technology. What is old is made even older than new again!

This is the time for caution, but not for fear.