So, for this assignment, I had to chose 5-10 words randomly and then do a Google image search for each word and choose one of the first ones. After, you had to make a story out of it, with or without the use of sentences.

To get random words, I chose to use https://wordcounter.net/random-word-generator, as I didn’t think the words I would just think up would be random. I then Google image searched with the settings on “free to reuse” as I don’t want an copyright issues. I will admit-I randomized a few times, as one of the times I got the word “male”. One of the first pictures that popped up with the changed usage rights was NSFW and I decided to “nope” out of that set of words! I actually did 2 sets of generated words, as I first did only 5, but then decide that that was too little and did another round of words. 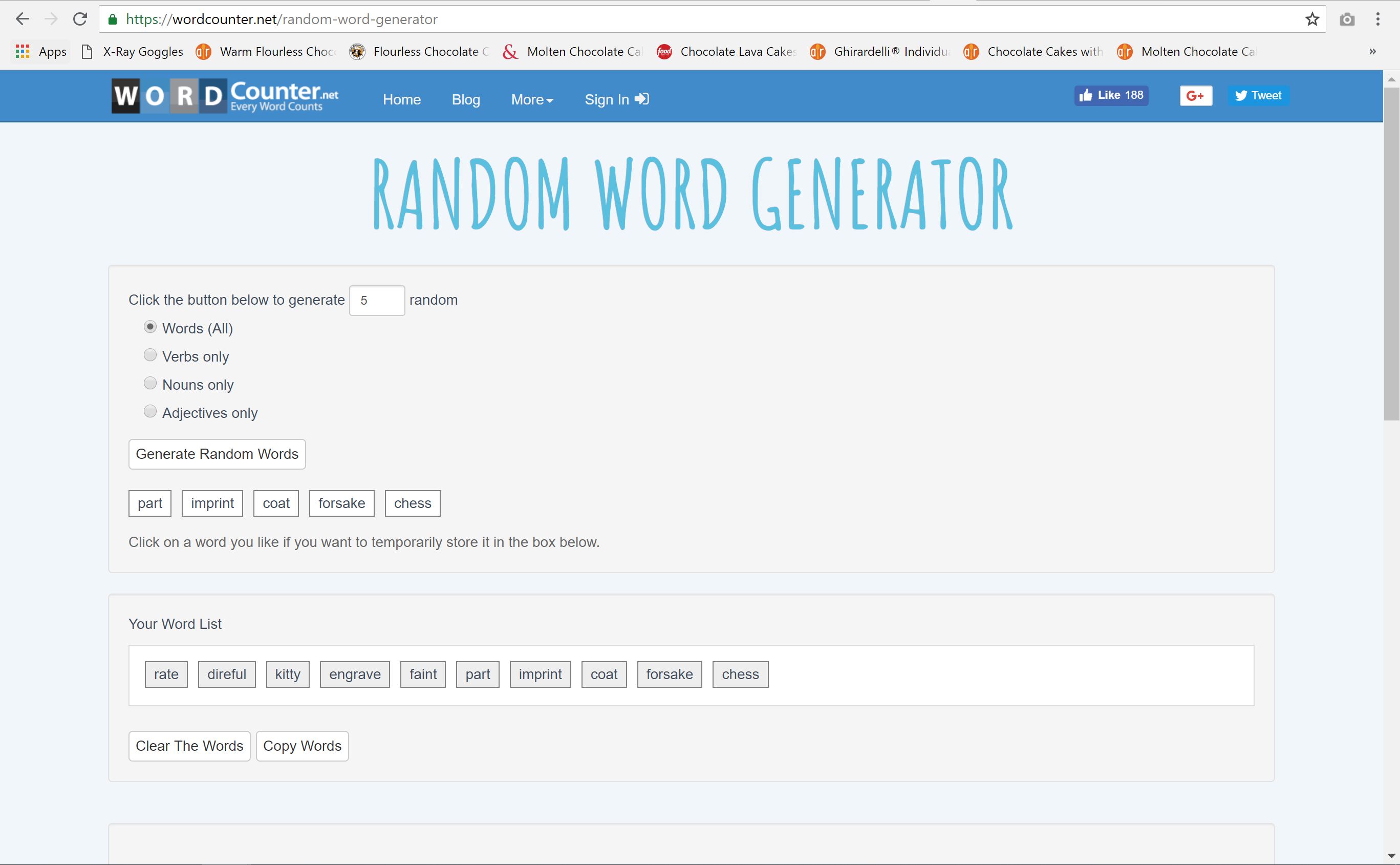 I then found the pictures I wanted to use and saved the links into a Word document. Most of the pictures were within the top row of pictures when I searched. However, not all of them are. For example, for “rate”, all of those graphs that popped up didn’t go with anything and were confusing on their own, so I went down a few rows for the heart rate picture. 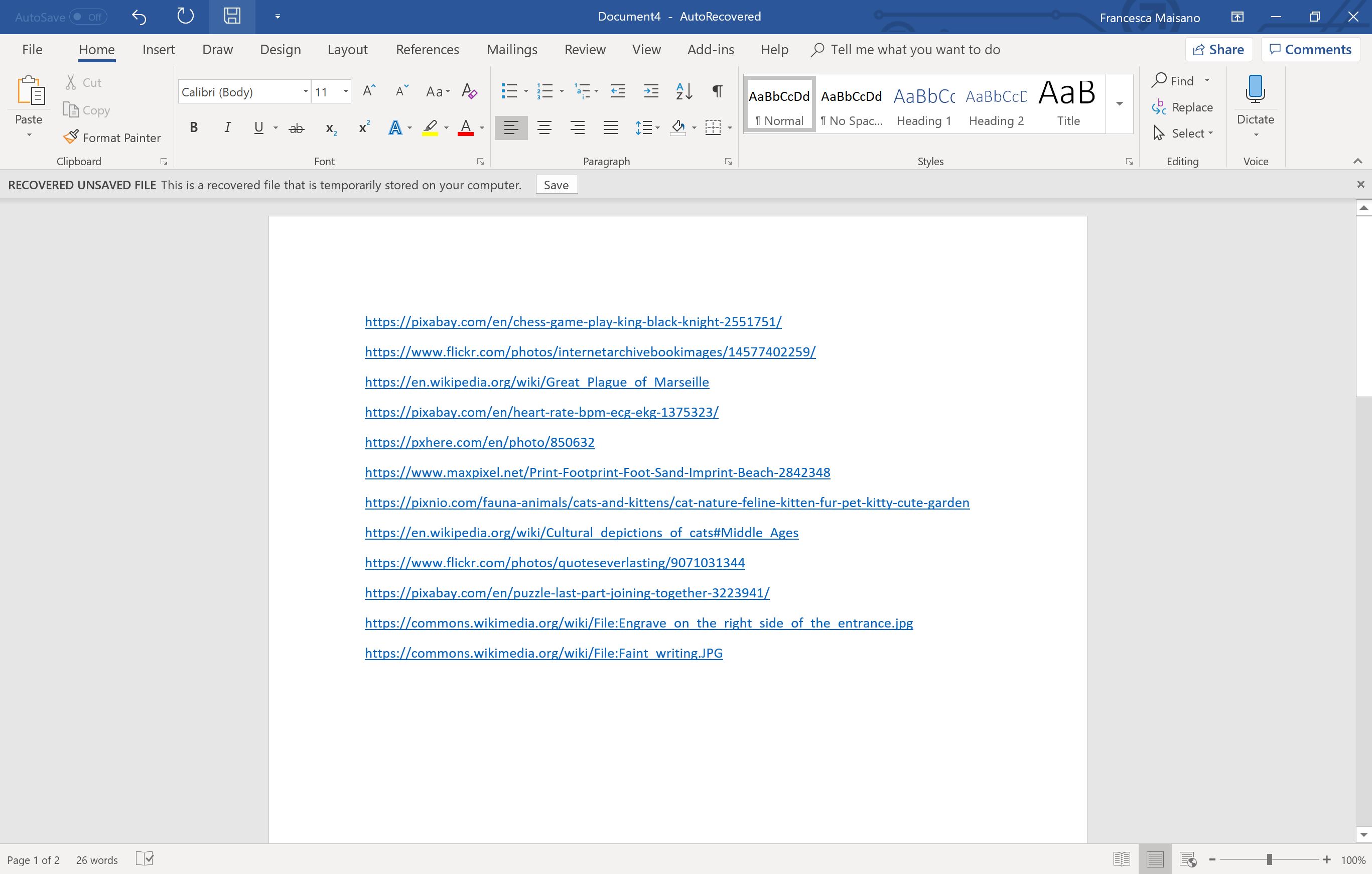 In another Word document, I copied the list down and then started to write the story. I knew from the beginning that I would be using sentences to help, as all of my words are very, very random. I based the story off of the pictures I found. For example, the picture for “direful” had a description talking about the Marseilles Plague. So, I based the story in Marseilles, France in 1720. I used the Wikipedia page about it for the date and general information. Everything else revolved around that aspect of the story. Obviously, it had to have a cat in it, based on the word “kitty”. According to this Wikipedia page, the Bubonic plaque would have been less severe if there had been less of a stigma around cats. So, I took that idea and small-scale applied it to my story. It is also why I mention that the mother liked cats while others didn’t, as historically there was this stigma against cats. 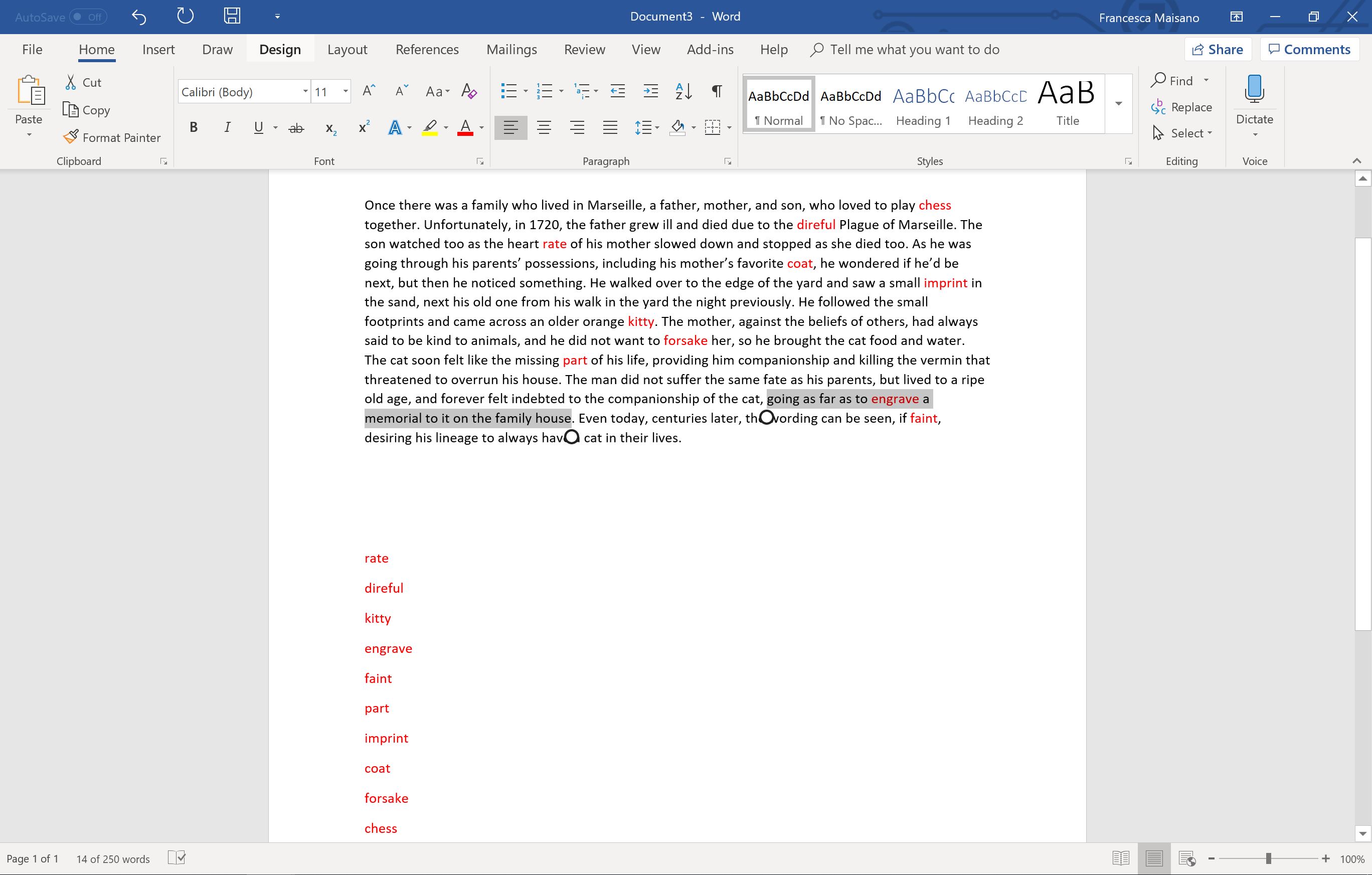 After, I inserted all of the pictures into the Microsoft Photos app and then added the text to each picture. I chose the “Loved” font as it seemed the most old-timey. I had to edit my sentences a bit to fit what the Photo app would allow size-wise. I also had to have the text take up the whole slide, with the picture has the background, for 2 of the slides, as that was the only way for all of the text to fit. I also changed the duration of the pictures so they wouldn’t be too fast to read. As with my other projects, I used a blank black slide to add the text for the intro and credits. My credits just said the songs I used and and who made them. It also said to check my blog post for the picture credits. 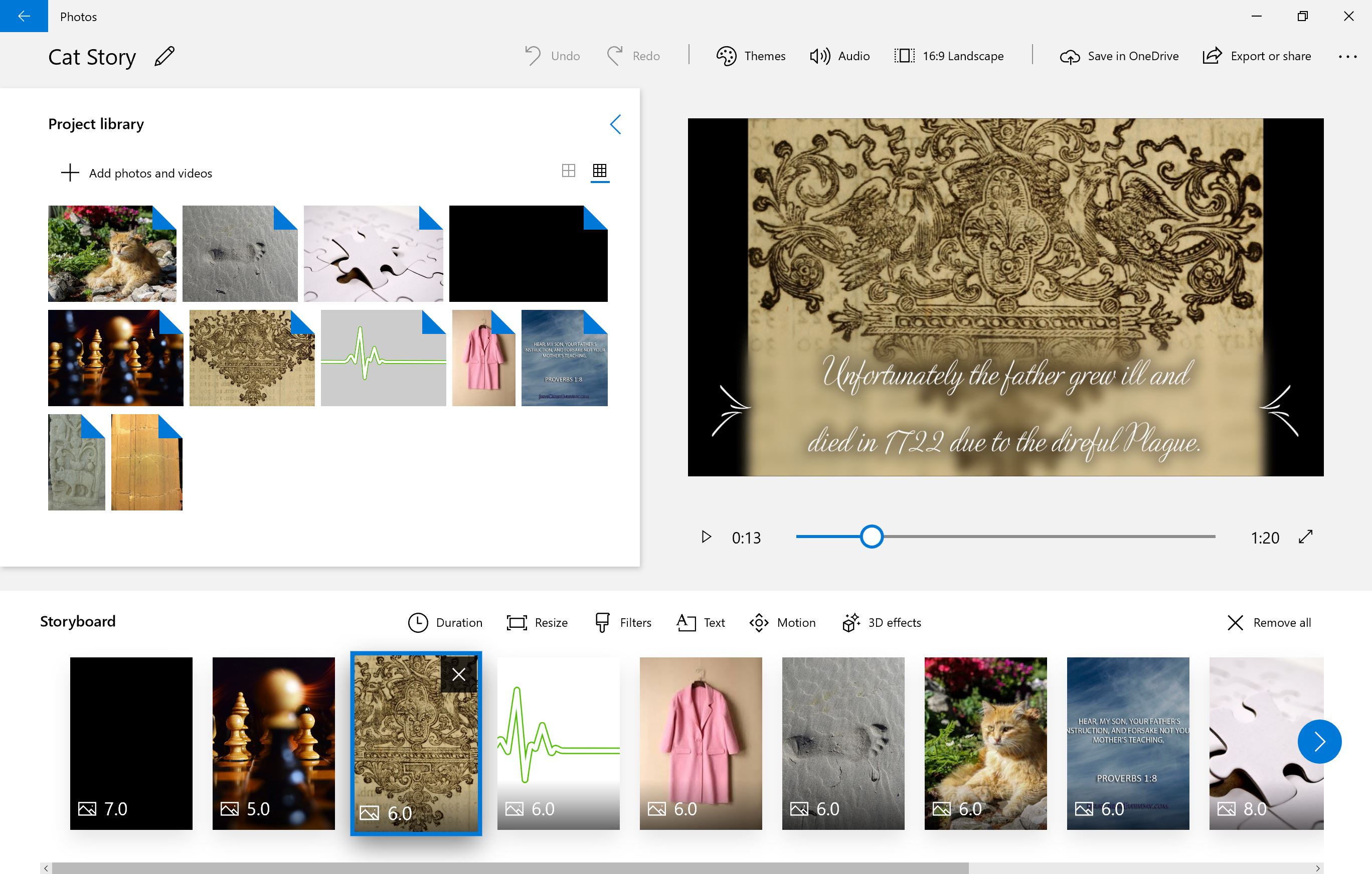 I then went into Audacity. I found 2 free-to-use songs from the YouTube Audio Library, one happy, one sad, to use as the soundtrack. Since the happy song, “Fond Memories”, had a seemingly slightly sadder, quieter part in it, it seemed like a good part to use for the part of the video after he met the cat. After all, it is bittersweet in a way. He lost his parents, so there’s still grief, but this cat has come into his life and made him happy. The title “Fond Memories” is also applicable, as that are what he has of his parents and later the cat once it dies-fond memories. The sad song, “Requiem In Cello”, didn’t clash with happy song and was also classical, so I chose it. I then inserted in “Fond Memories” and cut it to the length that matched my video. I did the same with “Requiem”, and then moved it to the right spot. Finally, I inserted another track of “Fond Memories” and cut it and moved it. 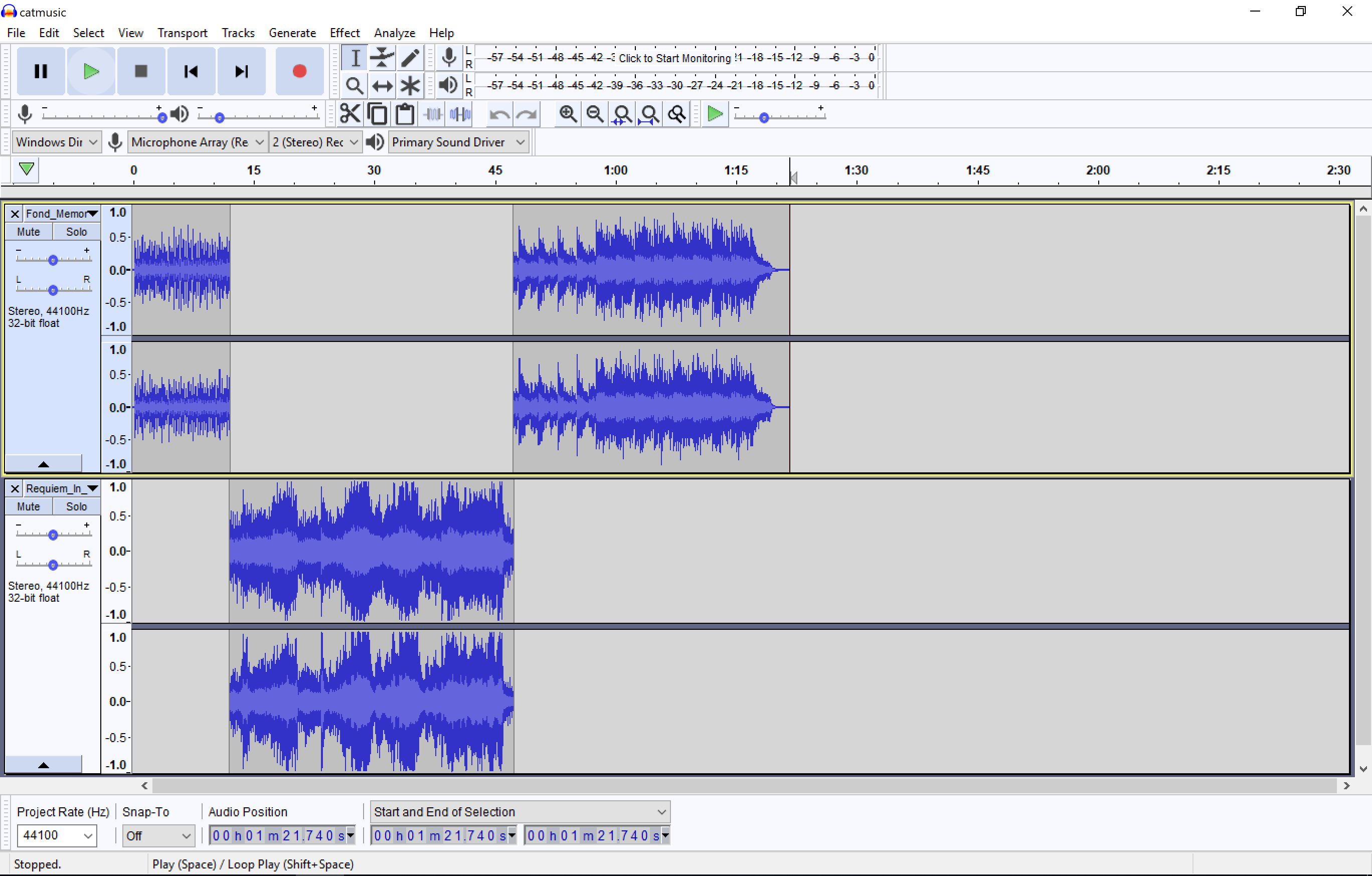 After that, I inserted that music file into the Photos app project and made sure it matched. It did, so I then exported the video!

However, the next day, I was re-reading the Weekly assignments and I wasn’t sure if when it talked about “all media sources” when it came to citing it meant also pictures. So, I created this post, then created the citations for all of the pictures and redid the song citations. The Photos app’s text limitations meant that I had to put each picture citation on its own picture/slide. I did this and made sure the song citations on the old end picture were correct. I then tried to redo my music with my 2 existing songs, with “Requiem” not changing but extending “Fond Memories”, or using more of the middle of the song, to also cover the new credits. However, the part of the music now covering the actually pictures/story I didn’t think fit as well, so I decided to find a new song for the credits. I again went to the YouTube Audio Library and found “English Country Garden”. While this takes place in France, not England, the cat picture has the cat in a garden, so I thought it fit. I also liked that it was a peaceful end to the video. I cut it and moved it like I did the other parts of the soundtrack. In the picture below, its the part starting at about 1:20. I accidentally merged the second part of “Fond Memories” and “English Country Garden” together, but I had finished all of the moving and cutting that I needed to do so it was OK. 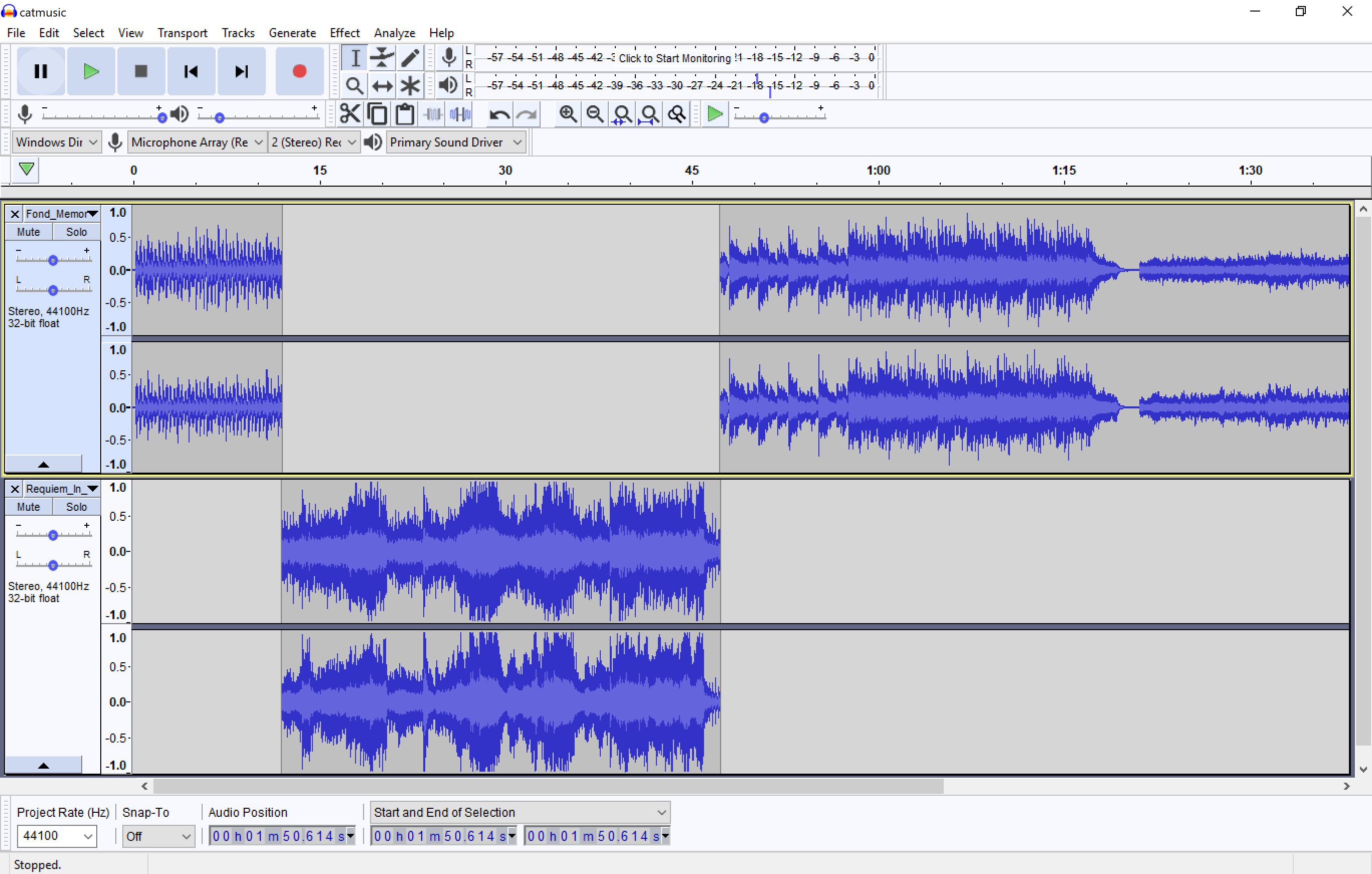 Finally, I uploaded the new music file into the video project and checked to make sure it worked. It did, so I exported it. The next day, I finished this blog post and uploaded the video to YouTube to be able to embed it here. I made the name “The Missing Part”, as that is the gist of the story-the cat was the missing part of his life.

This project was not too difficult. The hardest part was trying to make a story out of all of the random words and finding pictures for them. While the story is not complex or particularly thoughtful, I do like it. I actually really like the songs I found-I may have to keep using and listening to them!

Image from page 34 of “The plague at Marseilles consider’d : with remarks upon the plague in general, shewing its cause and nature of infection, with necessary precautions to prevent the spreading of that direful distemper : publish’d for the preservation

The image is released free of copyrights under Creative Commons CC0.

You may download, modify, distribute, and use them royalty free for anything you like, even in commercial applications. Attribution is not required.

“Hear, my son, your father’s instruction, and forsake not your mother’s teaching.” – Proverbs 1:8
JesusChristEveryDay.com

English: Left side of the entrance.

English: Faint writing on the pier by the south porch “Pray remember the Poor”