For this assignment, I had to make a video compilation of some of my favorite things that I have made for this class. I started by going through my blog and putting the links of all of the posts that I remember liking to make into a Word document. After that, I sorted them into the groups that they’d be in for the video. 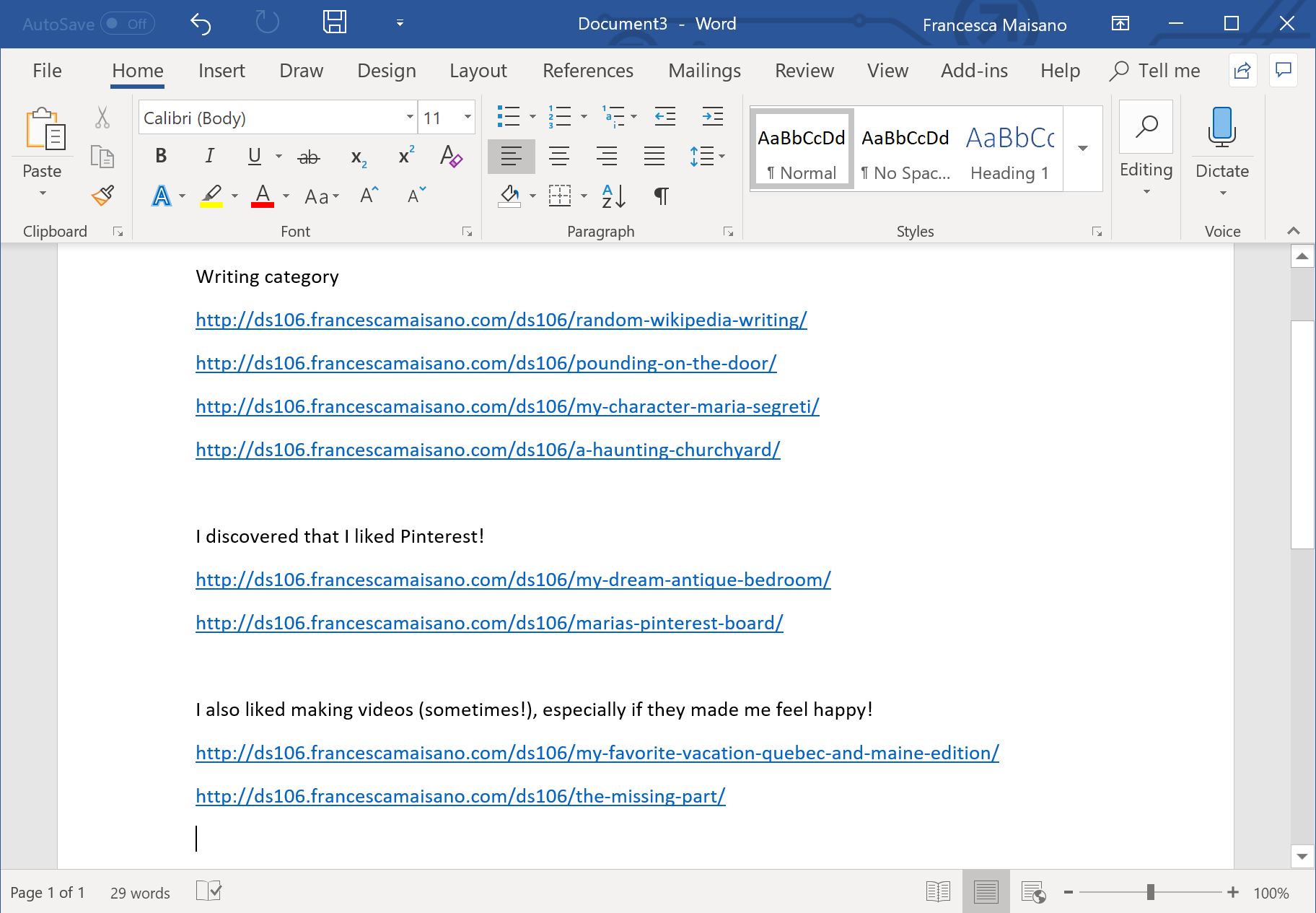 I also went through and figured out how many posts I made and what kind (starred, not-starred, and Weekly Summaries). 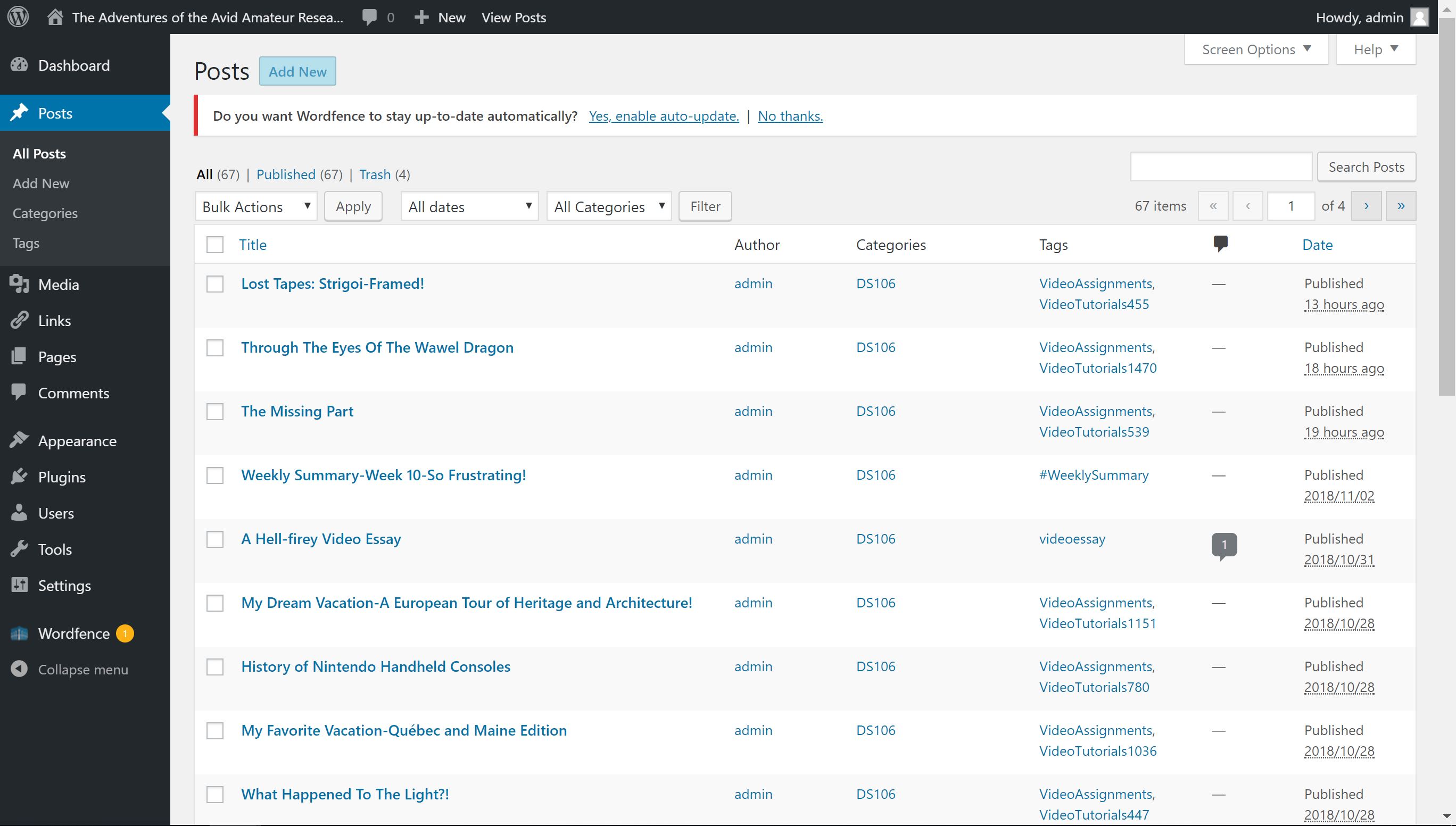 I put that into a different Word document to include at the beginning of the video. 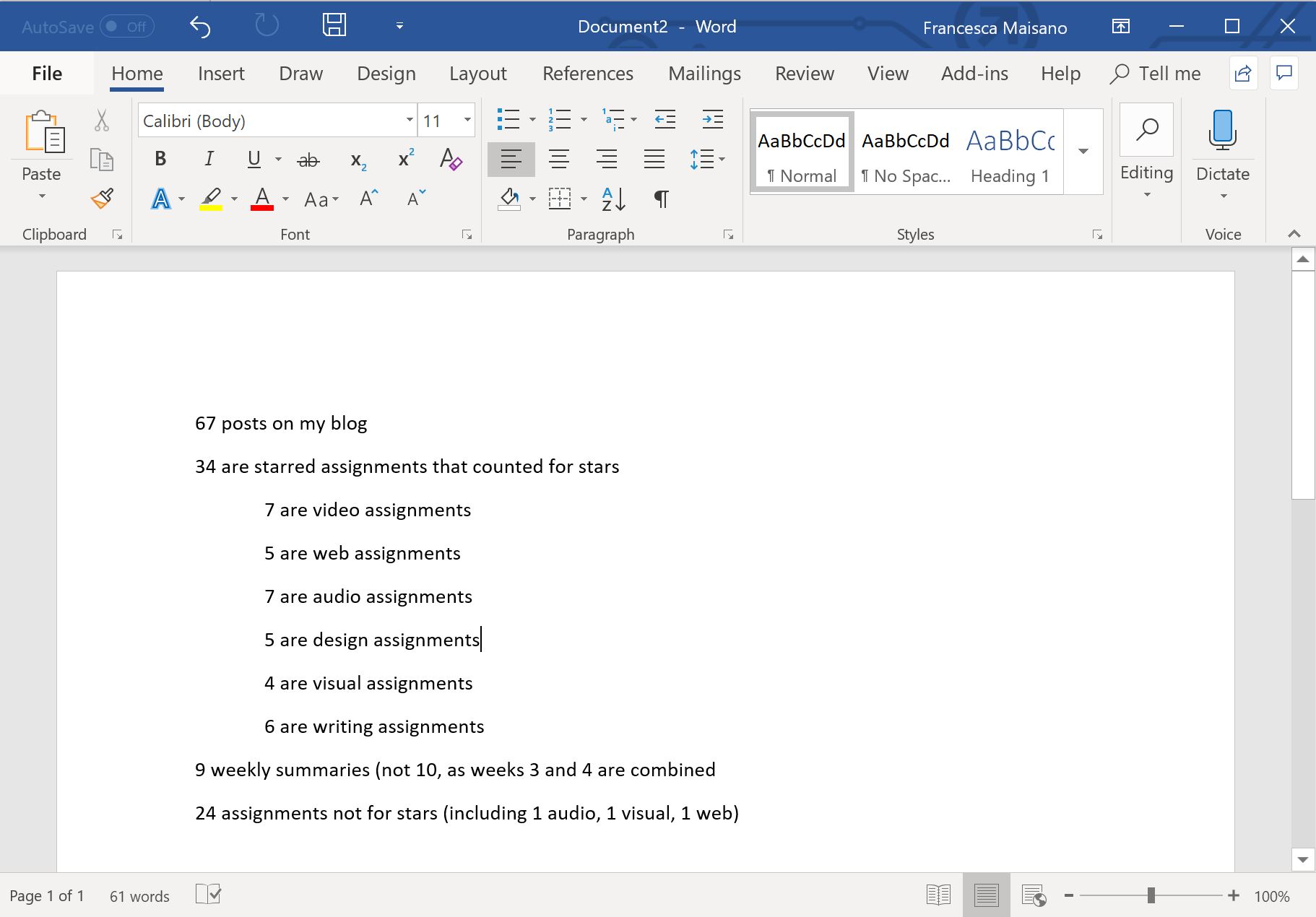 I then started working on getting all of those assignments into the Microsoft Photos app. I started with the Inklewriter post, as what I wanted to do was get a video of me clicking on the options, which I had no idea how to do. So, I googled it, and found this: https://betanews.com/2015/07/19/windows-10-secret-screen-recording-tool/. So, I did Windows button and G, and got a screen recording! I then used Kapwing to speed it up, to better fit in a video compilation. 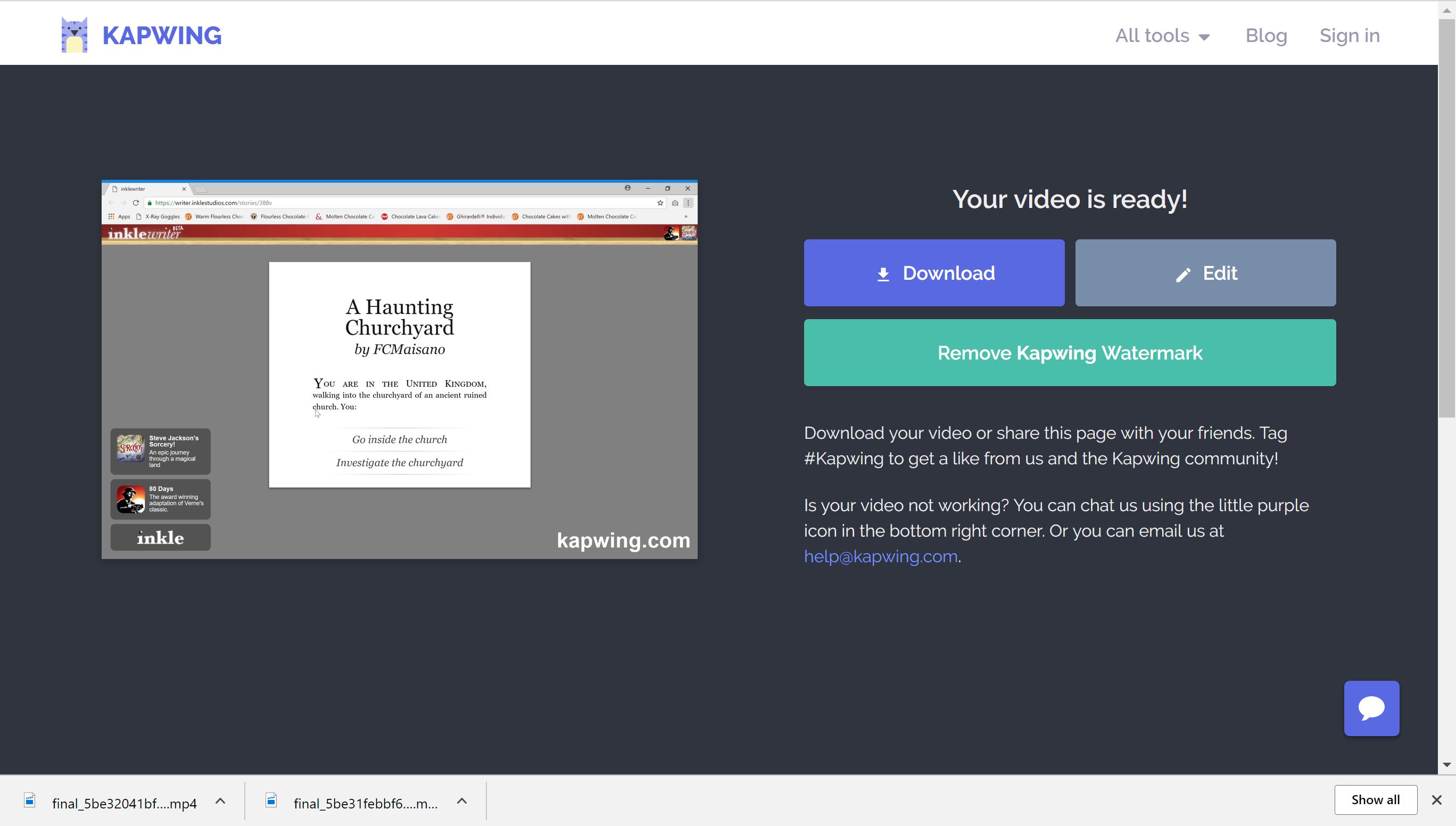 I then inserted that video in the app, and then inserted the three assignments that were pictures-the “sun” one, the medieval tapestry one, and the compilation of pictures of one of my cats. I did those because they were the easiest-I just had to upload the images! 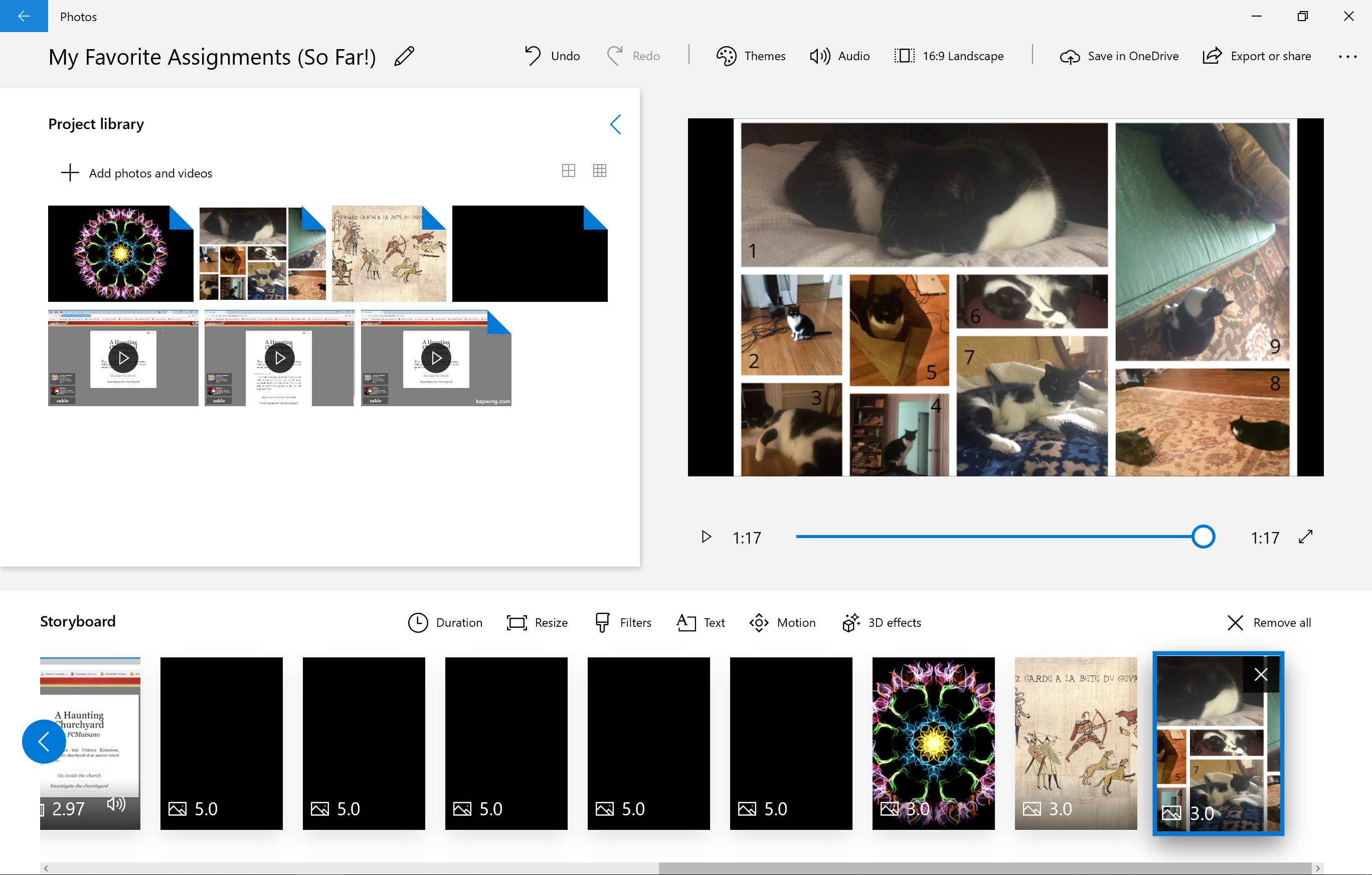 Then, I worked on the Pinterest and writing assignments. I screen-recorded the same way as I talked about above. For all of them, it took me a few tries to get a video I liked! My goal was for each video to be between 5-10 seconds, as the pictures and text were 5 since that seemed like a good time-not too fast and not too slow to read. 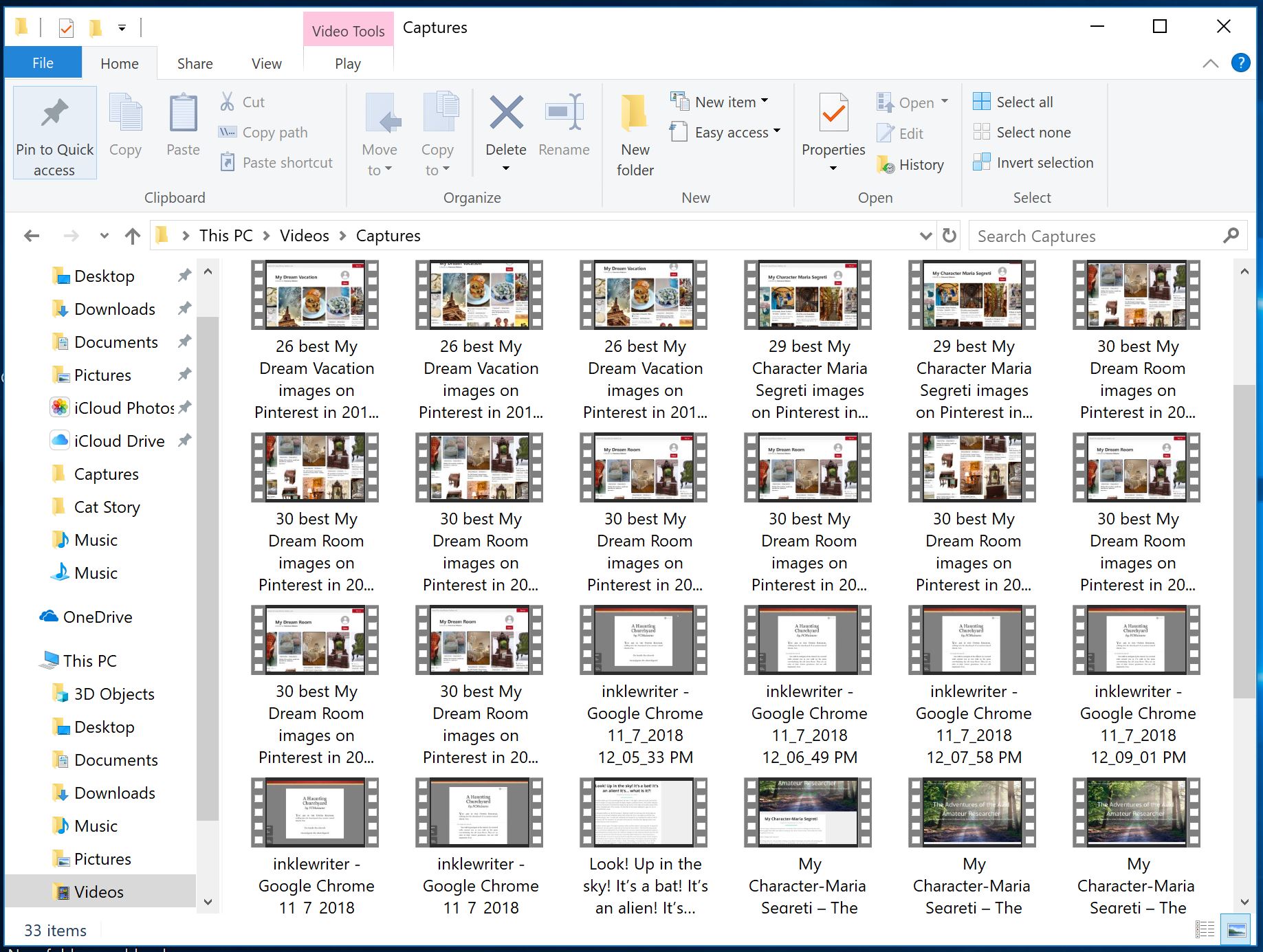 I then used Kapwing to speed up the videos so they wouldn’t make this video too long. 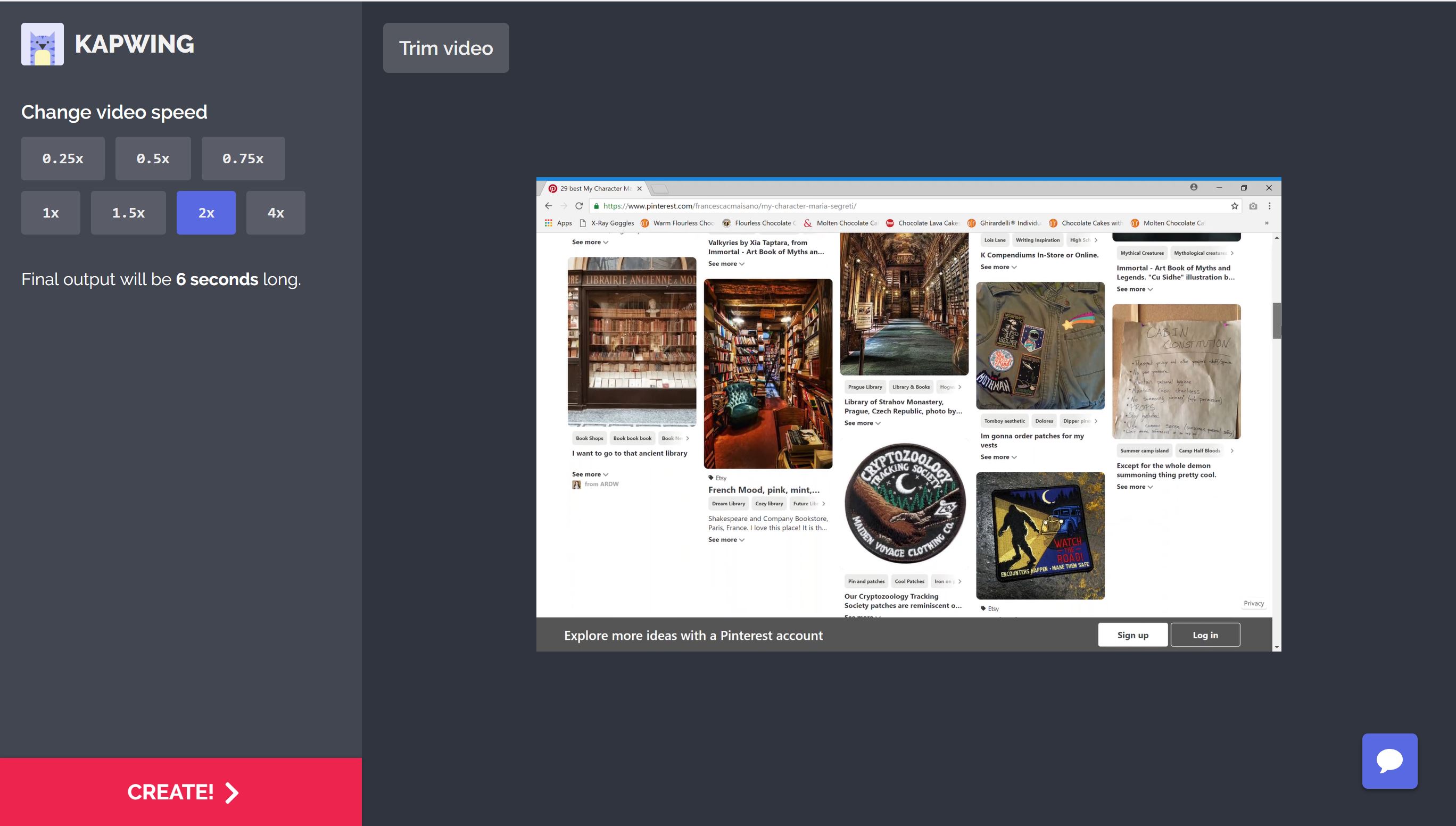 For the videos I wanted to put into this video, I had to use a different site, as Kapwing didn’t seem to work properly with it. The sound might be sped up, but it would just saw a black screen, not the videos. So, I googled and found https://www.mp3care.com/slow-motion-speed-video.aspx. For each of the videos, I used 2X and 4X when converting using the site to get the speed and time I wanted. Since the videos are all almost or over 2 minutes, I had to convert several time search, uploading the new faster video and then converting that. This took a long time to do, as the converting was not quick and I had to do it several times to get the time I wanted. As with the others, I was aiming for 5-7 seconds. However, the video for this assignment about my favorite vacation was longer, and I had to make a decision between the new sped-up video being too short or too long. I decided, as the video is the longest one I made, to have it be the longest in this video, and at a little over 10 seconds, it is. 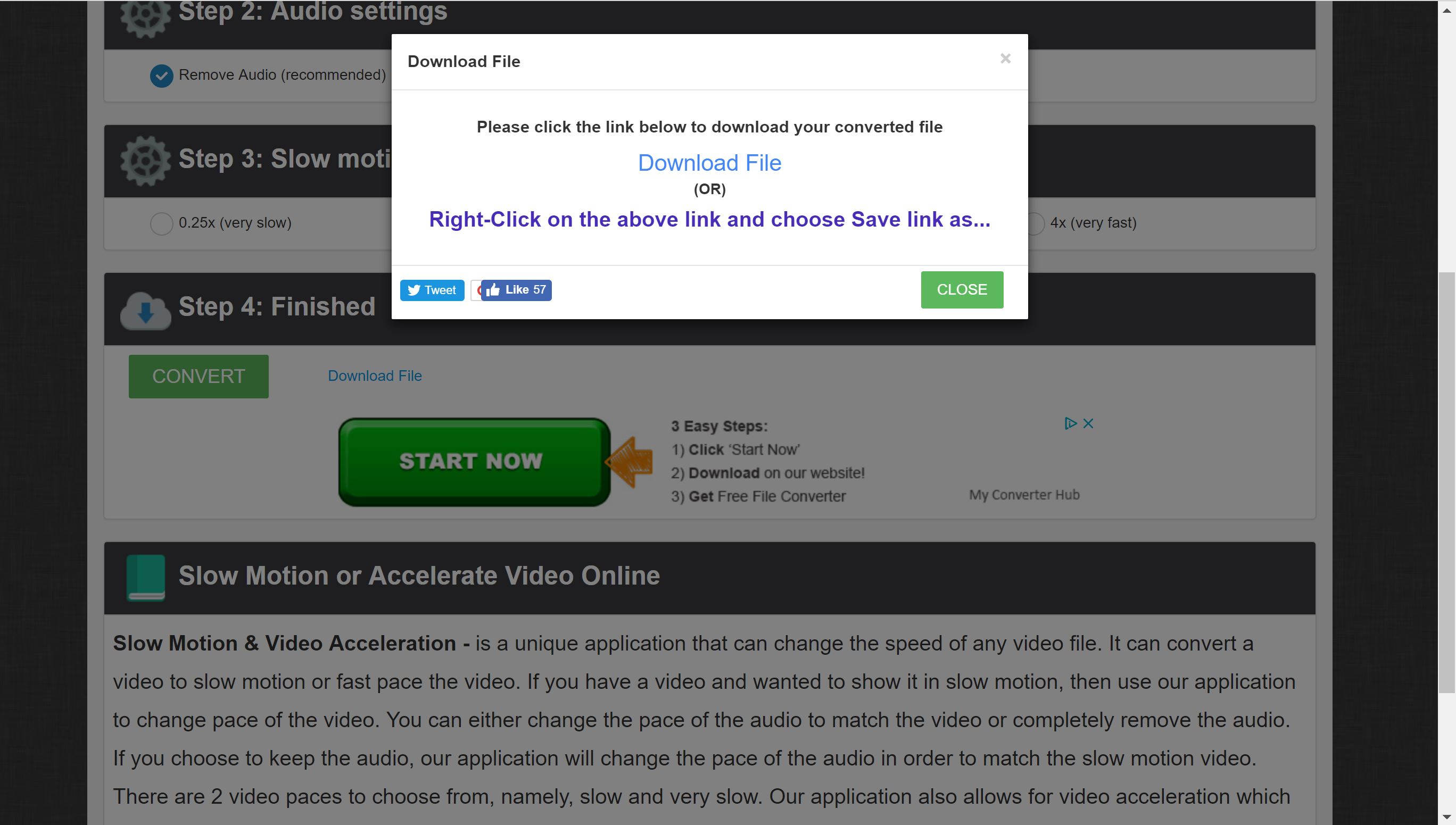 After that, I uploaded everything into the Microsoft Photos app, got it all in the right order, and made sure the section slide text was OK (I had made the section pictures, using the same black picture that I used for all of my videos and with the “Chilled” font that I used before, when I had first made the project, before I even inserted the Inklewriter video). I then went into Audacity, uploaded the “Fond Memories” file, a song that I had used and liked previously, as well as the siren I made from a pencil sharpener that was one of the assignments that I was mentioning. I then cut the latter part of the song and pasted it as its own track, moved the siren to the time that would line up with the right pictures in the project, and then moved the latter part of the song to be after the siren. I then cut the song to line up with the end of the video. After, I made the parts before and after the siren fade out and in repetitively, and then made the part of the song at the same time as the siren quieter, but still there, to give continuity. However, I wanted the siren by itself, as that is what I made, not the song, and I wanted to highlight it, so I made the part of the song overlapping the siren silent. 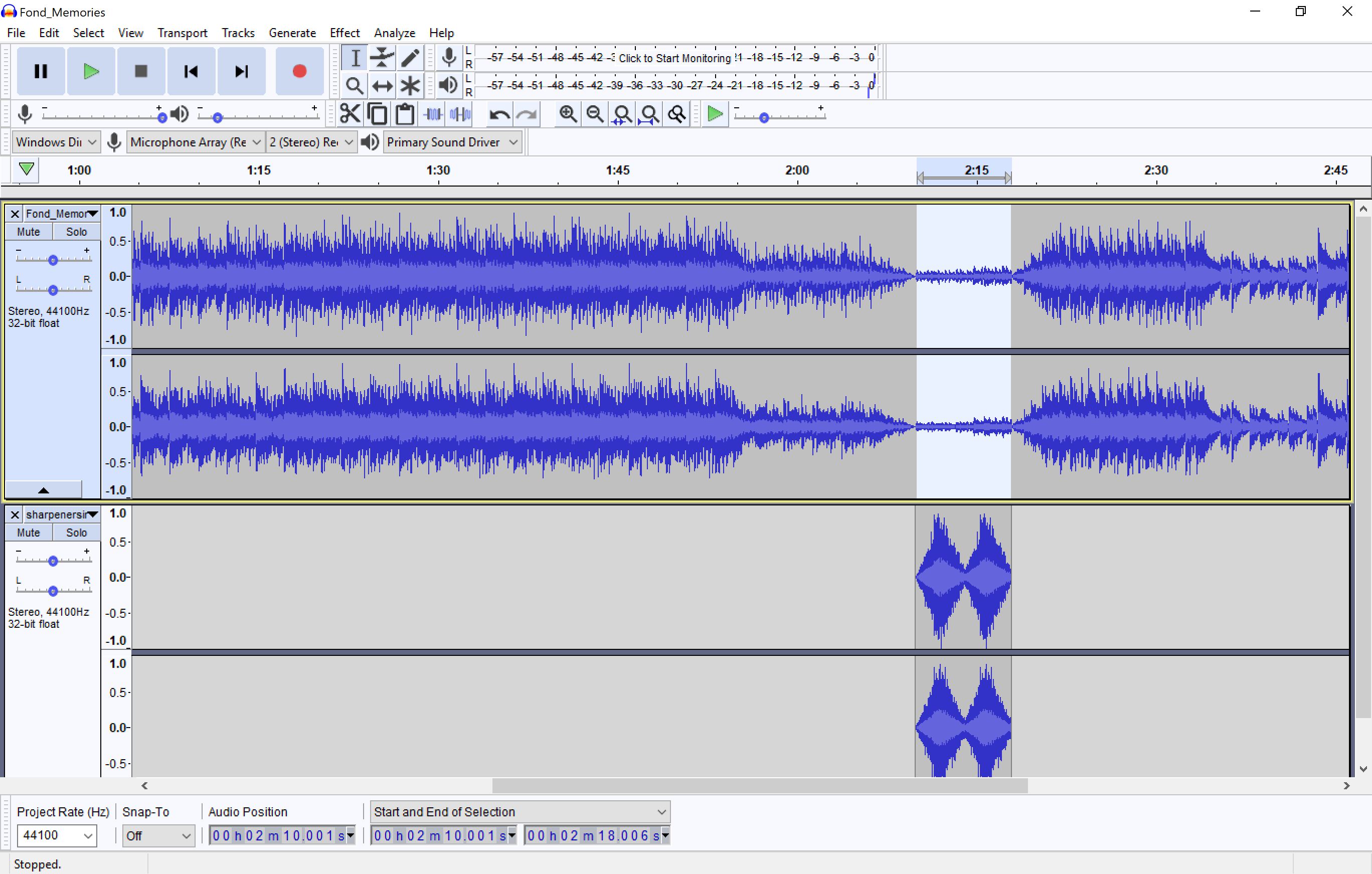 I then exported the audio file and uploaded it to the project. I then checked to make sure it matched. However, then I realized that I never gave credit to the Microsoft Photos app, Audacity, the online converters, or the song in the video, so I made those citation and credit pictures. However, then the audio file was too short, so I had to go back and repeat the whole process again. 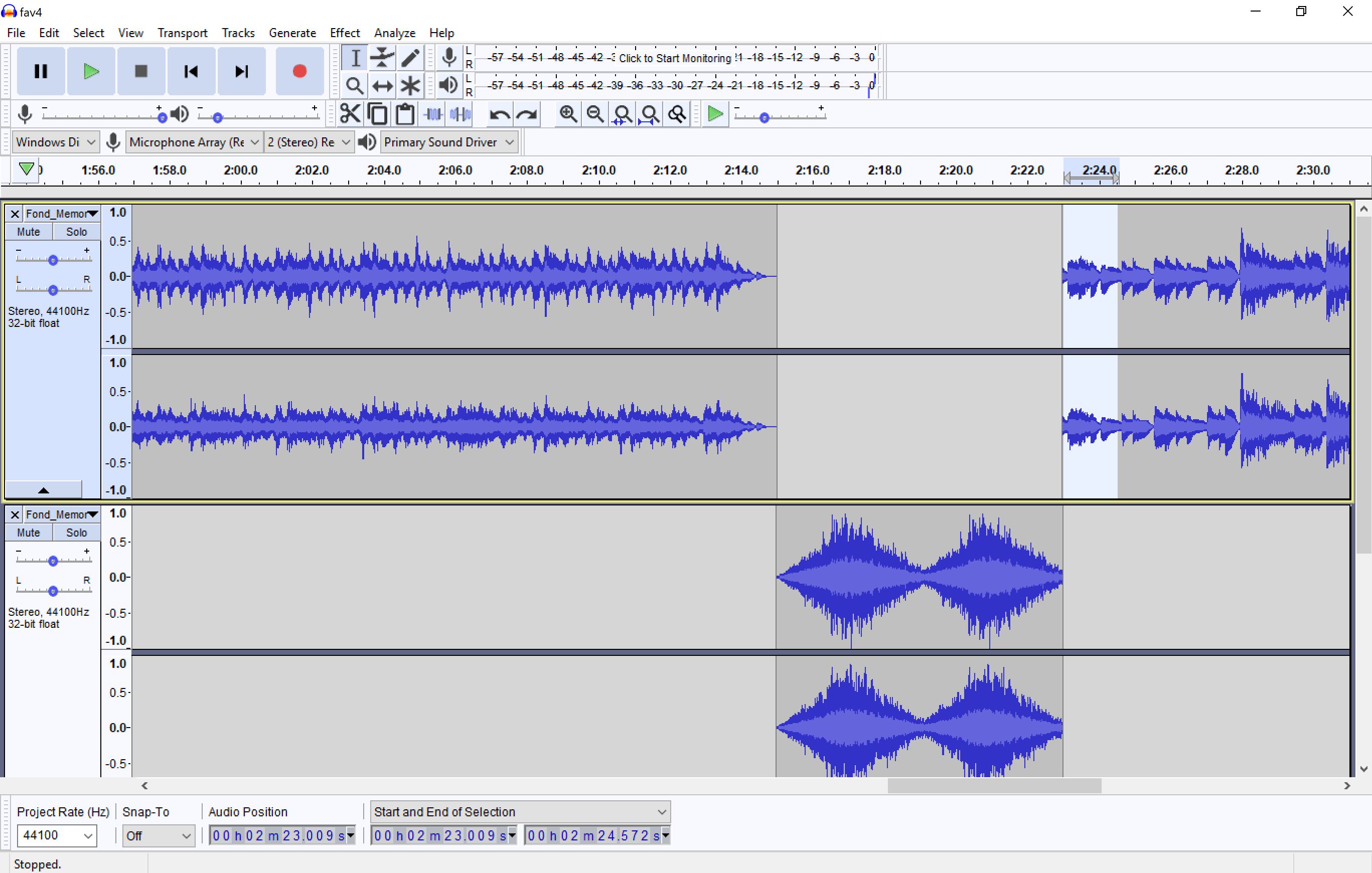 Finally, I uploaded that to the project, checked it, and then exported the project. I then uploaded it to YouTube.

Overall, this was a straightforward assignment to do. It was not super difficult, as it mostly used programs and apps I had used before. I chose to use the Photos app, not OpenShot, to create the video, as I didn’t need the animated title or intricate transitions for this project. This meant that I had an easier time, as the Photos app is easier for me to use! I did have some trouble finding the right online converter for the videos. Though, the biggest issue for this was time-it was a long and tedious process getting all of the videos to a good length. I do think this project helped me grow as a creator, as in this I got to practice all of the skills-making videos, editing audio, design, etc. I also learned that you can indeed trim videos right in the Photos app, which is useful! I don’t think I would do anything differently, except maybe find a quicker way to speed up videos! I also enjoyed looking back at the positives of the course, as I was very tired and frustrated last week. This was a nice way to end this week of assignments!

This is where the sound is from:

For this, I don’t have any new citations. Here are the links to the individual assignments that each have their own citations.

First, I like to write, so the assignments where I got to write I really enjoyed, even if they weren’t writing assignments!

I also discovered that I liked Pinterest, so those assignments were fun and easy!

I also liked making videos (sometimes!), especially if they made me feel happy or peaceful!

I also like to make assignments that are connected or inspired by each other, as it is nice and continuous and ties everything together!

While audio assignments aren’t always my favorite, I do like ones where I get to mess around with a piece of audio to my heart’s content!

This was originally a pencil sharpener!

Finally, I also like to use cool website and programs to create visual and design things that are philosophical, fun, or cute!

Places to visit in Arlington

Pounding on the Door

My Dream Vacation-A European Tour of Heritage and Architecture!