The piece of media I analyzed for this blog post is the “Skinwalker” episode of Lost Tapes, which on Wikipedia is listed as the 11th episode of season 1 and the 2nd episode of season 1 on the Animal Planet website where I watched the episode. To summarize: Andy is visiting his parents at their ranch in rural Utah and records the trip to show to his girlfriend when he goes back to college (his father is not pleased that he chose college instead of the ranch, so he is mad, making for some awkward moments). Andy and his father go to check on a sheep and her newborn kid, especially since they had a coyote problem. This is when they encounter the skinwalker, both seeing the skinwalker in human form with animal skins on, as well as in coyote form.

While watching, I noticed for the different points:

The selection in the show from the eyes of the show is because of the character Andy, who is holding the camera. So, much of the camerawork appears to be from the level of an amateur trying to record videos for his girlfriend, showing the surrounding landscape and parents. 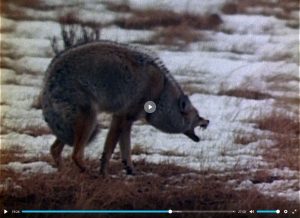 However, from a cinematographic perspective, it definitely was very purposeful. Take this coyote. The show shows many pictures and videos of coyotes. In this case, this particular one looks scary, which is the point, as the skinwalker, disguised as a coyote, is supposed to be scary. This purposeful choice helps to increase the fear.

The lighting, which is talked about a few sections below this section, is the biggest contrast. The natural lighting to the red lighting, as well as the blue lighting and the black-and-white lighting. This was especially apparent when they transitioned from color scheme to another. However, I didn’t notice any contrast when two things appeared on screen together. 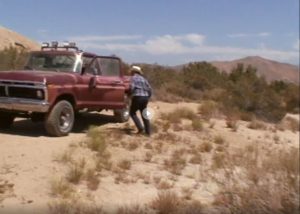 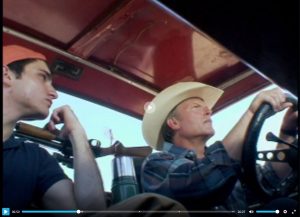 The main perspective is from chest and eye level, when Andy is holding the camera, or from his lap when he is trying to hide that he’s filming, since his dad told him to stop. It helps to make this look like a home video, something we’re all familiar with. It helps us connect to the character more, as well as establish the episode as being normal, with such a normal perspective. 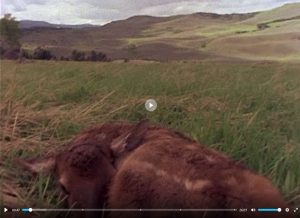 A few times, such as this one, it shows a very different perspective. It appears to be one of an animal, presumably a coyote (or a skinwalker in disguise) based on the coyote appearing throughout the episode. It puts us the viewer into the eyes of the creature, makes it seem more real. 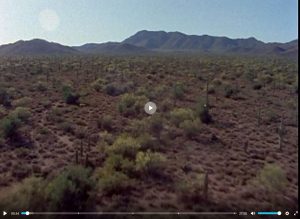 One time that I noticed depth was in the opening cinematic footage of “Rural Utah”. The camera moved along, pointed towards the ground while also showing the mountains and sky. It helped to show to expanse and wildness of the place, which helps to increase the fear and worry, since anything could be out there, and its such a big place. 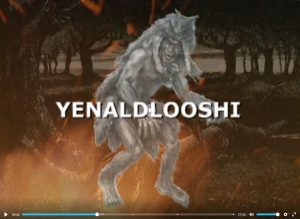 In addition, this show loves to show pictures or videos behind text, as seen in this photo. It adds a 3D quality, and the background can add to the mood. I will say though-this does look slightly dated, at least to me. Maybe that’s because it aired in 2009 and I used to watch it back then!

This isn’t something that I picked up on while watching, although that may be my inexperience and not the sh0w. 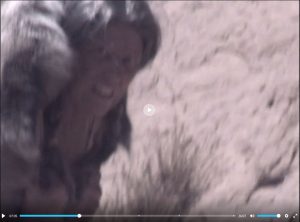 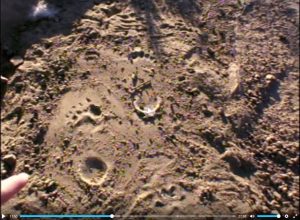 Andy is the one “recording” all of this. He’s not really trying to go for one moment, but just show his girlfriend around. However, he does keep “recording”, as more weird stuff goes on. He’s anticipating more weirdness, so in a way he’s practicing good photography technique, even if it is a video! He does manage to capture unusual things, like the women in the fur walking along the road, as well as the weird footprints. 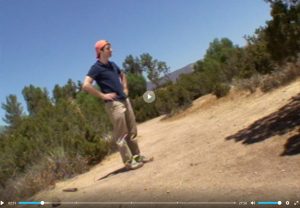 Lighting played a large part in the feel of the show. The main lighting is natural lighting. It represents normality-what we expect to see, and comfort, as it doesn’t appear sinister. It helps us see the beauty and tranquility of the rural landscape. 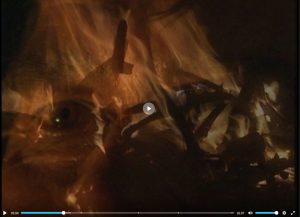 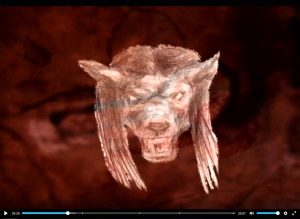 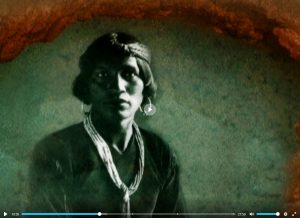 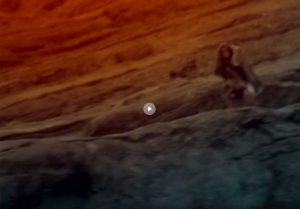 However, there is red lighting and colors, which represent the skinwalker. It looks more angry and sinister, helping to show the danger of the creature and the fear we feel of it. 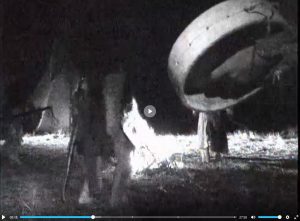 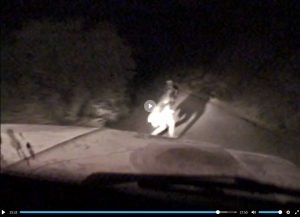 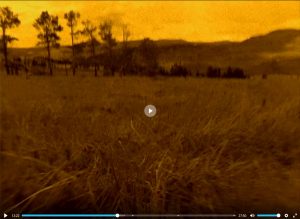 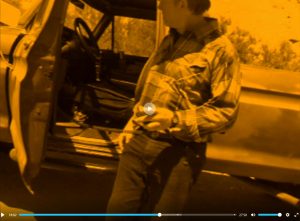 The color of the re-caps and flashforwards (the voiceover explaining what’s going on after breaks and at the end explaining what happens afterwards) is orange. This color is closer to the red of the skinwalker than the natural color used in what Andy is shooting. While the color isn’t as foreboding as the red, it does show how the characters were impacted after the encounter, which the show mentions. Andy decided to change majors to Native American mythology and his parents no longer have coyote problems, but they do hear strange animal calls. The orange reflects that the characters have changed in some way after all of this. 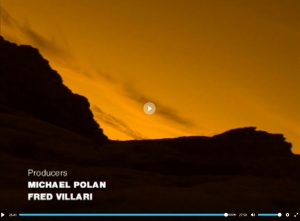 I didn’t notice a whole lot of this. However, the last shot of the show, with the foreground, the mountains, being dark and the sky being orange, looks foreboding. As mentioned above, the lighting just reminds us that the skinwalker is out there still-the danger is not over, the normality is not there anymore.

I chose this episode because on Animal Planet it came right after the “Chuapacabra” episode, which I previously watched for this class. I also chose this because this is another one of the episodes that scared me when I was little, and thus is one of the favorite cryptids/creatures/myths of my character Maria.

For this blog post, after I read the two articles linked on the weekly assignment post, I simply logged onto Fios on the Animal Planet website and watched the show. I used the Snipping tool on my computer to get the screenshots. I had some trouble at first, since the video took up more than my screen could show, so I couldn’t see all of it at once, and in Fullscreen, I couldn’t snip. I changed the zoom to 75%, which worked well. I unfortunately couldn’t play the video while snipping, so that is why there’s the pause arrow in the middle of all of the pictures. Since I am a photography noob, I didn’t know quite what each point looked like, so I took snips of anything that looked interesting, purposeful, or things even I noticed.

Overall, this blog post helped me to really look at and analyze the cinematography of something that I know previously I didn’t notice or care about, even if things like the lighting I may have noticed subconsciously. It also helped me to get more acquainted with the points of photography.

This is the link to where I watched the episode:

I took the Featured image from a snip (screenshot) I made of the episode. It was far harder than it should have been to get all of the words the in shot and clear, since they were constantly flashing on and off and everything!