So, for this assignment, I had to make a video of a perfect day in the life of an animal, and include music to go along with the animal or feel of the video. I decided to go with our theme of legend, myth, and folklore, and go with a classic legendary animal-the dragon. I researched dragon species and came across the Wawel Dragon. There was enough folklore and story to give some basis as to what the day and its habitat would look like. My character Maria is both a cryptozoologist and folklorist, so she loves legends like these that combine both.

After I did the research, I googled pictures (of course, labeled as “free to reuse”) that related to what I had read. For example, I found several pictures of the Wawel cave, and it mentions that it liked cows and eating people, so that is what I looked up. However, not all of my pictures are accurate. Both the picture of Krakow and the picture of the knights are from a later time period than the story would be in, and the picture of the knight fighting the dragon is not polish but american. I put the links of the pictures in a Word document, the same one as I used for my assignment The Missing Part, which is why in the picture below the top links don’t relate at all to this! 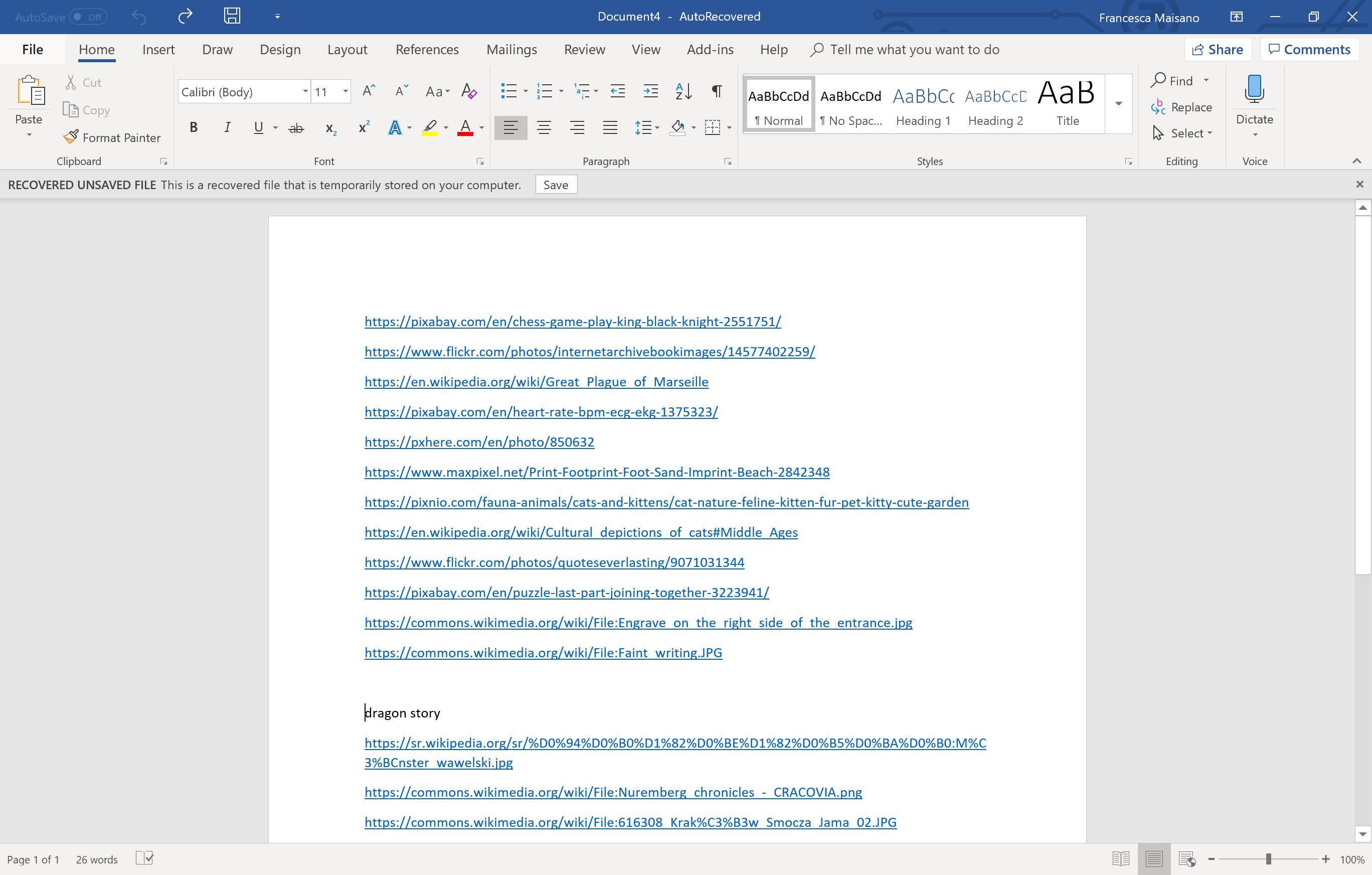 I then uploaded and inserted the pictures into OpenShot Video Editor. I tinkered a bit with how much time should be on each picture. I then added transitions so it would not be as choppy. I tried to have each transition mimic or relate to the picture in a way. For example, the picture of the polish landscape with the clouds in the sky has a transition that looks like clouds (and is called as such!). I didn’t have much practice with transitions in this program, so I did have some trouble with trying to resize them and make them fit and such. I used https://www.openshot.org/static/files/user-guide/transitions.html for help. You can see it in the background of this picture! You can also see all of the tabs of the audio I used, which I’ll get to next. 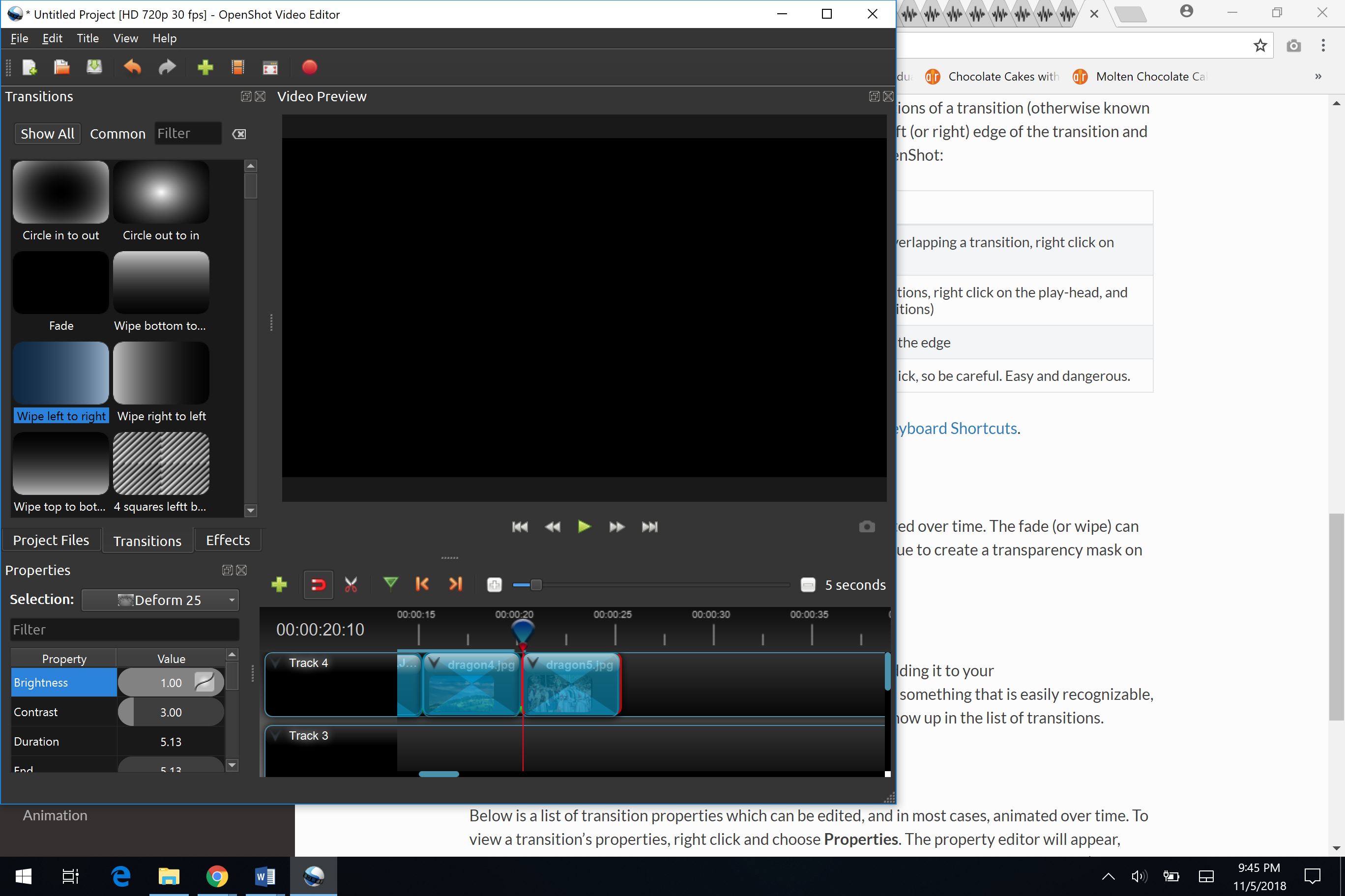 After I got all of the transitions figured out, I worked on audio. I had looked up in Freesound.org various sounds to use, like dragon roars and growls and medieval armies and such. After I found audio that I liked, I saved it and inserted it into OpenShot. I then cut it the match with the picture I wanted it too. For two of the sound bits, both of them the medieval ones-the one where the army is marching and the one where there is a battle-the maker, Yap_Audio_Production, had a picture with the logo as part of the audio file. I didn’t want that, so I used this https://www.online-convert.com/result/a6c0d52c-b675-49c0-83a4-e589cffa4c03 to convert them to .WAV. For the most part, this went fine, since it was one sound after another, not layering. However, during the “fight scene”, I did have two sounds. One was the battle audio and the other a dragon roar I inserted in to the track below it to go off right before a scream is heard in the battle audio. I thought it went together well enough! I added a roar at the beginning of the video to give a sneak peak of what the video is like, while during the picture of Krakow part I left it silent so that its merely setting the scene, not a part of the story. 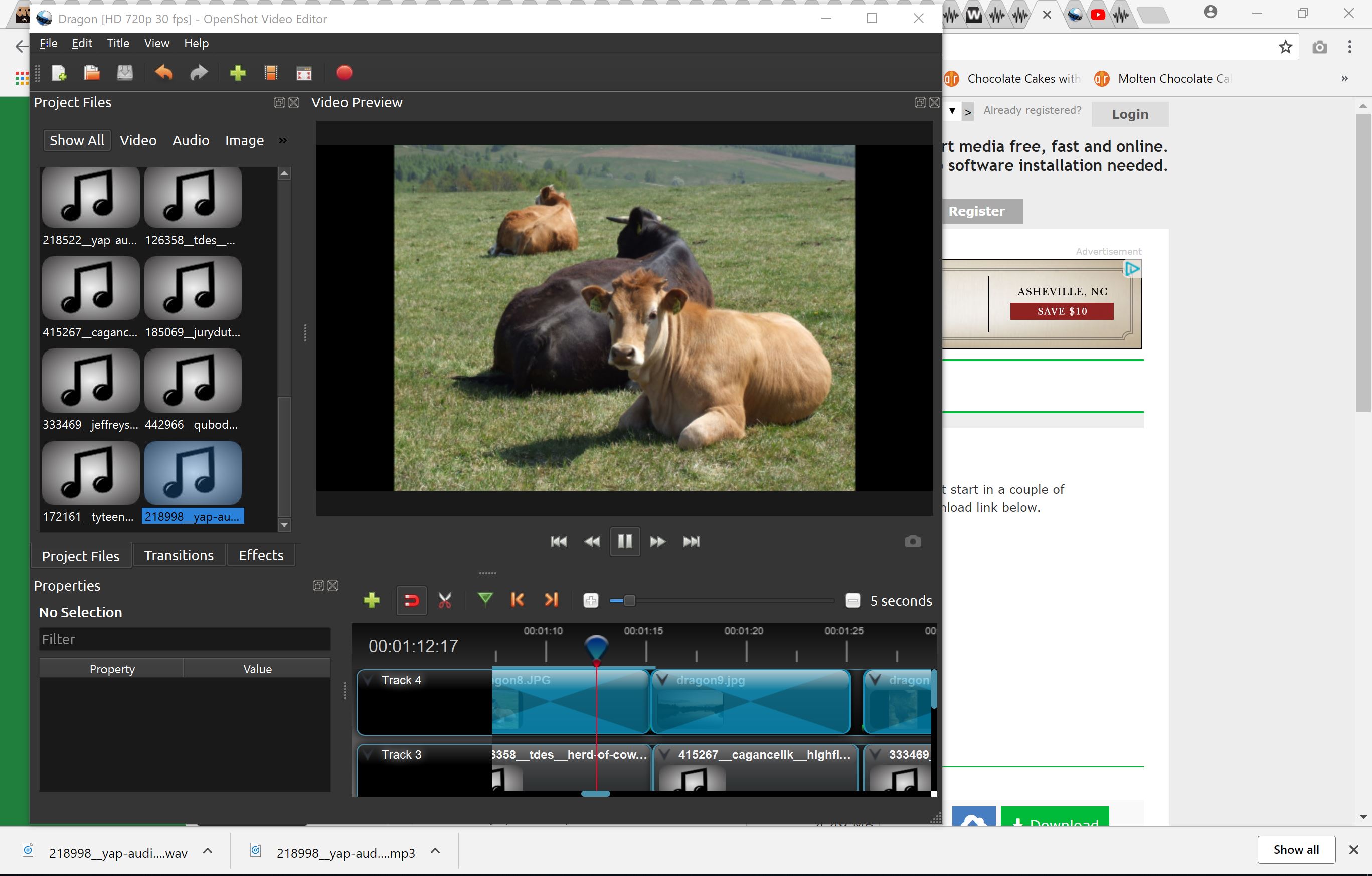 As with my “The Missing Part” post, I wasn’t sure what was required of citations in the video itself, so I decided to make pictures with the citations as text and a picture in the background. I created this post so that I would have a place to put the citations and then I did them for each of the pictures and sound files. For the picture, I chose a picture of a statue of the dragon. The stories of it are centuries old and the dragon dies at the end of them, so I figured at the end of my video story I’ll have the statue as a rerfernce to the age of the stories and that the dragon is long “dead”. 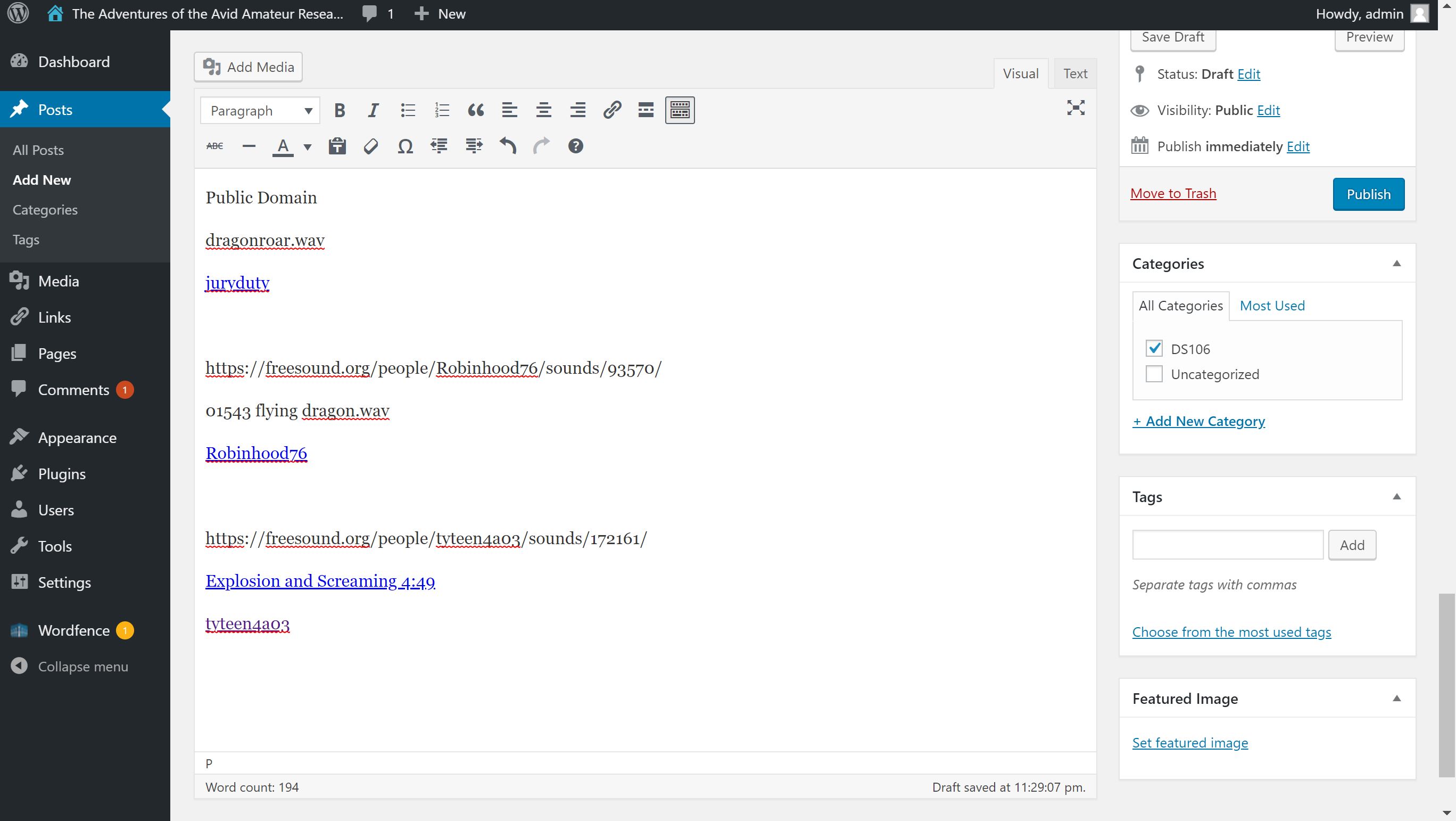 I decided to use PowerPoint instead of Paint.net to insert my background picture into, as I can move the text around on PowerPoint. I uploaded the picture into large text box of the “Title and picture” slide type slide and then copy-pasted the citations onto it. I cut off all of the pictures that didn’t fit onto the slide. I then duplicated the slide and copy-pasted the remaining citations into it, so that the new citations would be in the same place as the old ones. I repeated this process for the sound credits. For each citation, I removed the hyperlinks, as they are not useful in a picture format! I then underlined the URLs so that it’s not just a random string of text, and then made all of the words black WordArt letters, so that they stood out more. I then went back and changed the background picture to a different picture of the statue, as I had already cited a different picture. After all of this, I snipped (using the Snipping Tool) the pictures on the slides to get pictures that had both the text and the pictures and inserted them into the video project. I had the flapping noise from earlier in the video come back again, with a different cut and length of the original audio file, to be the background of the citation pictures, as it just seemed right to me. Maybe its because its a steady noise and mimics how the dragon goes on to live other days after this story-its story isn’t over yet. Maybe I’ve overthinking this! 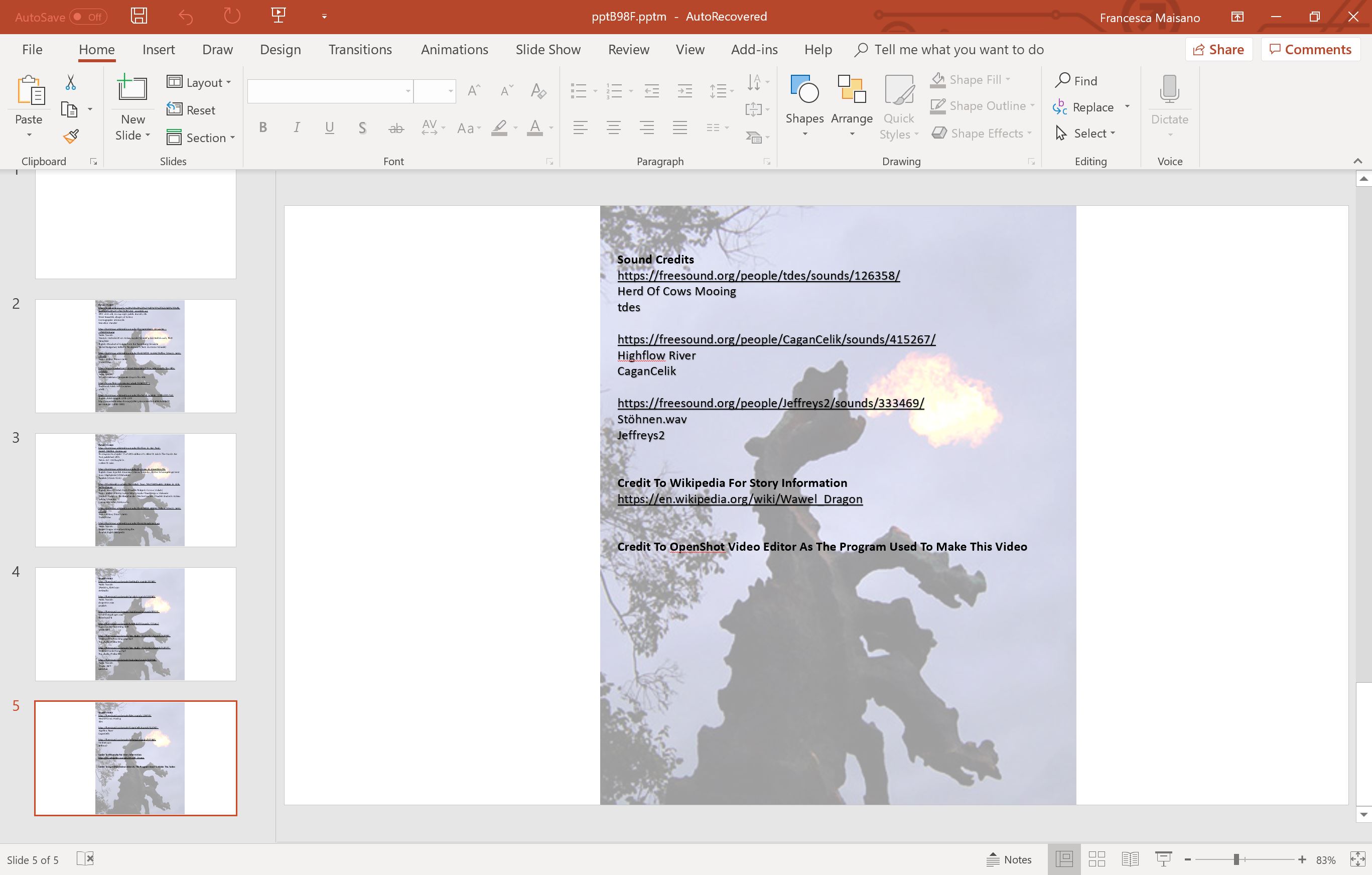 After all of this, I exported the video. The next day, I uploaded it to YouTube. I had trouble finding the video at first, since I had saved it in an odd place on my computer!

This project was not particularly easy, but it also wasn’t hugely difficult. I enjoyed the research aspect. Finding the pictures and audio was not too hard. The hardest parts were figuring out transitions in OpenShot and doing all of the citations! I do feel more comfortable with Openshot, so hopefully that’ll help in later assignments!

English: View of Vistula from Piłsudski Bridge in Cracow at dusk)

Credit To Wikipedia For Story Information

The Rocky Road to Dublin-Music Mapped